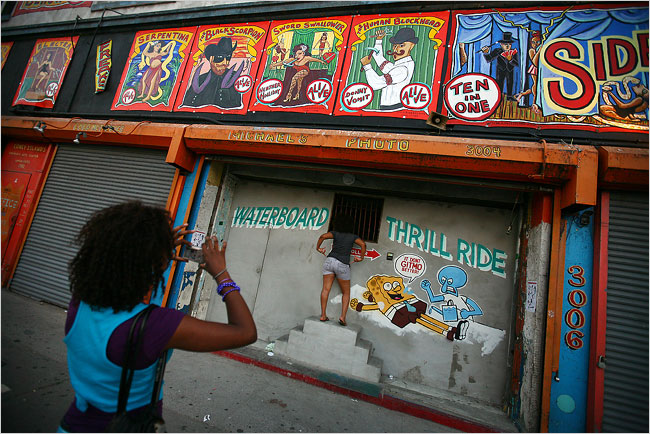 If you climb up a few cinderblock steps to the small window, you can look through the bars at a scene meant to invoke a Guantánamo Bay interrogation. A lifesize figure in a dark sweatshirt, the hood drawn low over his face, leans over another figure in an orange jumpsuit, his face covered by a towel and his body strapped down on a tilted surface.

Feed a dollar into a slot, the lights go on, and Black Hood pours water up Orange Jumpsuit’s nose and mouth while Orange Jumpsuit convulses against his restraints for 15 seconds. O.K., kids, who wants more cotton candy!

Don’t ruin the magic for the kids by letting them know that Orange Jumpsuit Guy is really a robot.

The title above is from the Spongebob Squarepants testimonial on the attraction’s boardwalk storefront.

Second Tuesday of every month, 7:00 pm